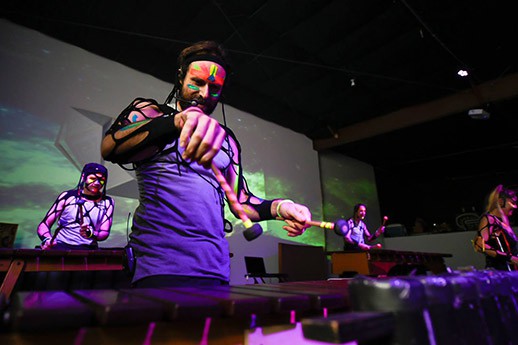 We always love it when Rattletree plays Empire. We’re big fans! Rattletree is one of ATX’s most UNIQUE sounds, blending electronic music with traditional music of Zimbabwe! Get ready to DANCE.
-Empire Control Room & Garage for SXSW Party

“One of my favorite CDs at CD Baby”
-Derek Sivers, founder of CD Baby

Rattletree is a “must see”. They are a high energy fusion of African and other world influences that is immediately accessible, and rousing.
-David Courtney, “Music beyond Borders”, KPFT Houston 90.1 FM

I AM totally amazed at the size of their Marimbas!! WOW -it’s almost Surreal ~ you’ve really got to see this!!! The sounds are Amazing & So Much fun to dance with!
-Sydney Strahan, facilitator-Houston Ecstatic Dance

It was a sight to see and a unique joy to hear!
-Tad Hendrickson, Global Rhythms Magazine

Marimba and electronica may not be musical terms associated with one another, but Rattletree Marimba, based in Austin, has earned a reputation for fusing giant, hand-made mallet percussion instruments with hypnotic grooves that make you want to get up and dance.
-Joel Luks, CultureMap Houston

Soundscape: Marimba in the Dining room-recorded for KUT Austin-
http://kut.org/2007/04/soundscape-marimba-in-the-dining-room/

Rattletree was the perfect pick to kick-off our civic engagement project on campus. The musicians were engaging and extremely talented. The band’s music appealed across generational and cultural divides, and they even got a bunch of timid college students out of their seats and on the dance floor.
-Kelli Arena, Executive Director of the Global Center for Journalism and Democracy.
Sam Houston State University

Rattletree is a “must see”. They are a high energy fusion of African and other world influences that is immediately accessible, and rousing.
-David Courtney, “Music beyond Borders”, KPFT Houston 90.1 FM

You don’t have to be booked at the festival to make an impact. Rattletree had dozens of fest-goers dancing on Barton Springs Road both Friday and Saturday nights. Look for a big turnout when the impressively melodic collective plays…
-Michael Corcoran, Austin360

Rattletree is authentic Zimbabwean marimba with a twist. It’s impossible to resist the African beat commanding you to move along with the energetic music.
-Wendy Wever-Austin Daze Magazine

The more I listened to Chamukwenjere the wider my frequencies became, which means that I could go to higher planes of existence. The song is a vehicle to higher astral realm. It is simply beyond words.
-Ambuya Stella Chiweshe-Zimbabwean Musician (Piranha Records)

Our members are still talking about how much they enjoyed the fun, high-energy music.
Joanna Wolaver
-Shoal Creek Conservancy

I AM totally amazed at the size of their Marimbas!! WOW -it’s almost Surreal ~ you’ve really got to see this!!! The sounds are Amazing & So Much fun to dance with!
-Sydney Strahan, facilitator-Houston Ecstatic Dance

…if you happen to be at one of their shows and you’re not dancing/grooving in some way, there’s no hope for you, you’re already dead!
-found on an online blog describing show at Revolution (College Station, TX)

I was extremely impressed with the craftsmanship of the marimbas! The show was mesmerizing. The music was so beautiful and hypnotic, most people couldn’t stop dancing and they were fabulous to watch. Looking forward to another show!!
-Hannah Williams, Austin Musician

I’ve heard all the best players of Zimbabwean music for over 20 years, and Joel Laviolette is a serious chain in the link of it’s continuity.
-Ralph White, Austin Musician

Fabulous sounds. Fascinating seeing these lily white guys sing and play African music with as much passion and talent as if they were from the continent.
-A’Muse Media, Houston